Was your ancestor a war hero?

April Fool and her family revealed in the 1911 Census

Ever wondered who makes up a real-life family of Fools? Well now you can find out thanks to a hilarious discovery we've made in the 1911 Census.

Meet April Fool, a 45 year old mother of four living with her baker husband Marchant Fool, 50, in Cheetham, Manchester in 1911. April was an April Fool by marriage but she and her husband clearly shared a sense of humour when it came to naming their brood. Unbelievably, joining them in the 1911 Census are daughters Jan (17 years), May (15 years) and June Fool (11 years), and son Augustus Fool (8 years).

Interestingly April Fool did not only spend her daily life raising her family of Fools, she also worked as an entertainer – clearly a talent for comedy matched by her family name and her job as well. 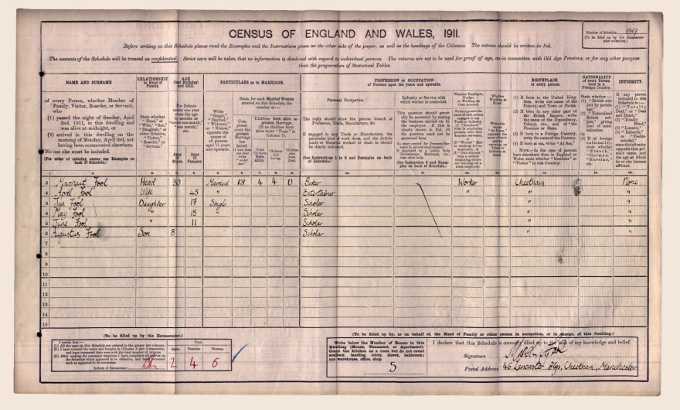 Rhoda Breakell, head of genesreunited.co.uk said: "April Fool and her family of fools is an extraordinary record in the 1911 Census and anyone wanting to see it can easily view it on the genesreunited.co.uk blog without searching until midday today, so you can go take a look! Searching the records can reveal all sorts of funny names and unusual family circumstances - it's really satisfying when you find a particular gem that provides a unique snapshot of life at the time or simply makes you laugh."

It seems like 1911 was the year of the 'Fool' with not only the discovery of April Fool and her family but also a further 29 people recorded in the 1911 Census with that surname.*

Interestingly, also revealed in the 1911 Census was a Susan Augusta Fool living in Mere, Wiltshire at the time the Census was taken. Susan was a widow but perhaps if she'd had children she may have followed the same naming theme that April Fool took.

Breakell continued: "Researching your family tree is a great way of learning about your ancestors and a fascinating exploration into your own history. You never know what you might find!"